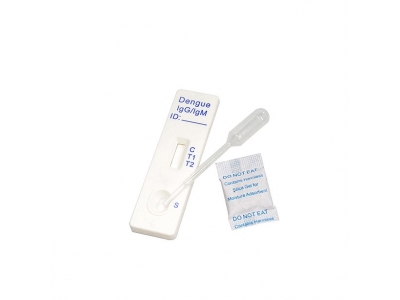 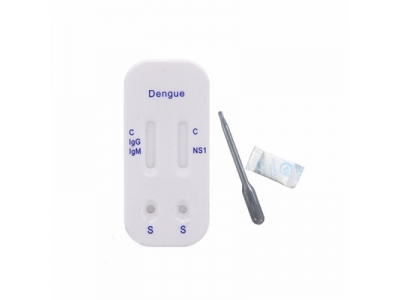 Dengue virus, transmitted by the mosquito Aedes aegypti and Aedes albopictus mosquitoes, which widely distributed through the tropical and Subtropical areas of the world. There are four known distinct serotypes (dengue virus 1, 2. 3 and 4). In children infection is often subclinical or causes a self-limited febrile disease, However, if the patient  infected second times with a different serotype,  a more severe disease, dengue hemorrhagic fever or dengue shock syndrome is more likely to occur. Dengue is considered to be the most important arthropod-borne viral disease due to the human morbidity and mortality it causes, NS1 is a highly-conserved glycoprotein that is present at high concentrations in the sera of dengue-infected patients during the early  clinical phase of the disease. NSl antigen is found from the first day and up to 9 days after onset of fever in sample of primary or secondary dengue infected patients. Usually IgM does not become detectable until 5 to 10 days after the onset of illness in cases of primary dengue infection and until 4 to 5 days after onset of illness in secondary infections. In primary infections, IgG appear the 14th day and persist for life, secondary infections show that IgG rise within 1-2 days after the onset of symptoms and induce IgM response after 20 days of infection.

Dengue IgG/IgM/NS1test cassette is a lateral flow chromatographic immunoassay for the simultaneous detection and differentiation of NS1, IgM and IgG in human serum (or plasma). The kit is a diagnostic device for qualitative detection.